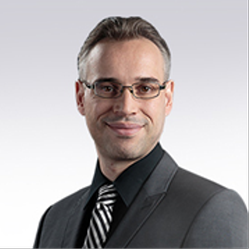 Christian A. Nijhuis received his Ph.D. degree from University of Twente in 2006 (Cum Laude; top 5%). In the group of Professor George M. Whitesides, as a postdoctoral research fellow, he developed a platform for measurements of charge transport across layers that are one molecule thick. In 2010, he received the NRF research fellowship (3 million dollar) and he joined the Department of Chemistry at the National University of Singapore and was promoted to Assoc. Prof. in 2016. In 2012, he received the NRF CRP grant to start a new program to develop plasmonic-electronic devices which entered phase II in 2017 (total funding of 14 million dollar). In 2020, he moved back to the University of Twente as Full Professor to start a new group Hybrid Materials for Opto-Electronics. He co-authored >160 peer reviewer papers, gave >100 lectures at international meetings, received several awards (including Dean’s Chair (2018) and NUS University Young Researcher Award (2016)) and is member of several committees/boards (including Editorial Board member of iScience). His research interests cover the areas of molecular electronics, dynamical systems, plasmonic tunnel junctions, supramolecular chemistry, nanofabrication and surface science